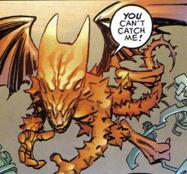 Dixie Dexter was the second child to world-renowned scientist Rex Dexter and the first of the heroine Horridus. She was born when Horridus was on the run from the law, having escaped from prison where she was serving a sentence for murder, a crime that she did not commit. Dixie was initially raised on the streets until Solar Man came to kill her mother for her supposed crimes.

Horridus survived the incident and with the help of her lover, Rex Dexter, her name was cleared. Dixie was now living with both of her parents who soon married, cementing their position as a family. The Dexter family were then deposited in Dimension-X by Emperor Kurr as he begun his plans for world conquest.