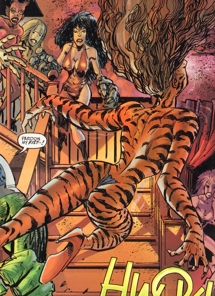 Shortly after Dragon had returned to the Chicago Police Department, he performed a raid on a brothel run by the Vicious Circle. He battled against a number of super-powered prostitutes and Tigress was one of them. She is later hit with Freak Out and is depowered.