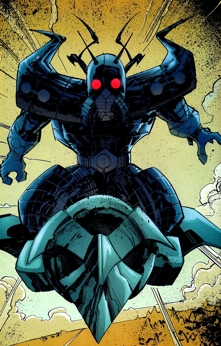 The Seeker first showed up when Dragon paid his first visit to God Town and attempted to eliminate him. It was assumed that he was an agent of CyberFace or a bounty hunter after the reward that had been put up for Dragon’s capture or death. The Seeker’s glider got destroyed in this initial encounter when Dragon threw Thor’s enchanted hammer.

A couple of years later, CyberFace had long been deposed but the Seeker continued his vendetta against Dragon. The hero had been given the task of delivering gifts to children in the place of a kidnapped Santa Claus. The Seeker injured Dragon to the point that he could no longer perform this task but the Seeker himself was left glider-less once more, stranded in the snow, wandering an unspecified location in the Great Northwest.

He is not seen for many years and is next seen fighting Malcolm Dragon who ends up killing him by punching a hole through his stomach.