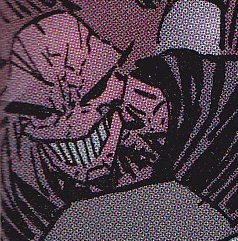 When Dragon inhabited William Jonson’s body he began seeking out a missing Rita Medermade. He visits a local freak outpost, but it quickly escalates into a battle. Schemer is briefly seen at the outpost before Dragon flees. He is later decapitated by Dart and has his his head mounted on a wall.