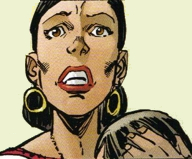 The woman who would go onto marry Darren Wilde left Mexico illegally to better provide for her young daughter after the death of her husband. She met her second husband when he took part in a police raid upon a group of illegal immigrants. The couple fell in love and were soon married but Mrs. Wilde’s happy new life came to an abrupt end when she was struck down by a passing car and killed.