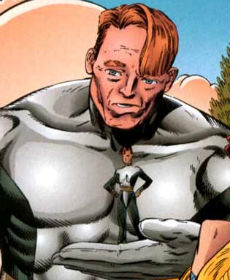 After WWII, the national hero known as SuperPatriot helped form the Fighting Force to battle the communists and that group later became known as the Liberty League in the 1960s when the U.S. government started funding them. One of these members was Mister Big, a size-shifting man whose girlfriend, the Hornet, also became a member.

Following a heated exchange between BattleTank and SuperPatriot, the entire team began to fall apart and later disbanded. Mister Big retired from the superhero business and married his lover and teammate, the Hornet. They had two children together and were happy in this state of retirement.

When the Cosmic Cops came to Earth and held New York under martial law, Freak Force were called in to repel their assault. Jake Farrell brought in the Hornet and Mister Big despite the protests of SuperPatriot. The long-since retired heroes proved no longer fit for action and retirement beckoned once more.