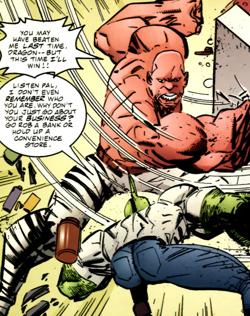 Back when Dragon was drinking a lot to cope with the murder of Debbie Harris, Johnny Nitro had been in the same bar. He attempted to start a fight with the hero but was swiftly defeated and arrested. Johnny Nitro remained in custody and was one of many villains that attempted to flee from Stronghold Penitentiary towards the end of the Gang War.

Some time later, OverLord II had taken a contract out on Dragon’s life and Johnny Nitro was one of the Vicious Circle members that tried to claim the reward. He was promptly defeated with Dragon not even remembering who he was. Johnny Nitro tried to rape the super-powered prostitute which caused him to be incinerated by the death-dealing superhero known as Solar Man.