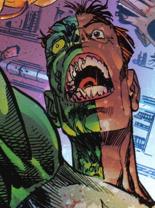 One of the many villains that emerged during the Gang War, HalfBad spent the majority of that conflict at the Freak Outpost bar. He remained with the Vicious Circle over the years until he became one of the monstrous Virus’s many victims during a massacre at the villains’ headquarters.