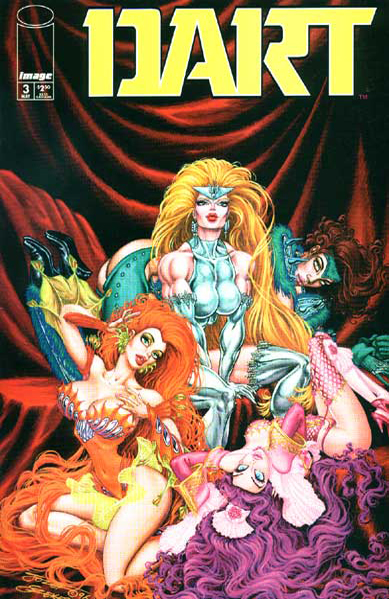 Vogue Attack leaves the dying Dart behind as the shrink-wrapping cuts off her oxygen and causes her to pass out. Her mind drifts back to a few years ago where had been in a bar with a friend who was about to be sexually assaulted. Unwilling to stand by and watch someone else becoming a victim before her eyes, Jill August reacted. She took darts from a dart board and blinded the main would-be rapist before beating down the remaining thugs present.

As the life leaves Dart, her plastic coating is ripped off by Shaq Splayed who then resuscitates her using CPR. The full roster of Blood Chic is present and they announce that they had come back to Galb Toys when Rosette had detected the scent of Dart in trouble. They explain how Gregory Brockman stole their likenesses for his toy line much in the same way that he done with her. Dart suggests that Blood Chic allow her to train them and prepare them for revenge.

The launch date for the new Blood Chic and Vogue Attack line arrives and Gregory Brockman hosts the event. He introduces the heroes and villains to the excited children present but when he unveils the toys he is shocked to see Forest Folk toys present instead. Leah Brockman’s voice then speaks over the loud speaker to inform everyone present that her estranged husband has infringed on copyrights. Dart and Blood Chic step forward to back up these accusations.

A fight breaks out between the two rival teams and Death Gaze takes the opportunity to fight Meteorite whom he has a crush on. Swamp Gas and Rosette compete against one another with their rival scents while Shaq Splayed is caught up in a duel with Carpenter. Sirene is attacked in a pool by Walrus but their clash destroys the water barrier which washes all of the combatants away. Dart defeats Mistress Brouhaha in a fight before targeting Gregory Brockman.

Leah steps forward to punch her ex-husband before enlisting Death Gaze’s assistance in depositing Gregory on a remote island. She takes control of Galb Toys and reinstates the Forest Folk toy line. Blood Chic and Vogue Attack continue their rivalry over the years. Dart would go on to a successful crime-fighting career on her own. She ignored the constant attention from Kill-Cat before eventually going on to become the leader of Freak Force.