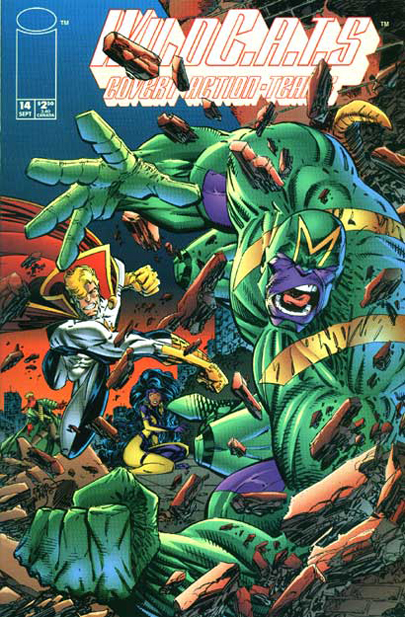 The Wildcats bring down the final, and most powerful, member of a Daemonite fragment group known as the Warbreed. With the defeat of Stronghold the team is congratulated by Lord Emp for their recent efforts dealing with their hated enemies. Voodoo makes it very clear that she wants the vacation that he promised them several missions ago and is appeased by the offer of a trip to a Caribbean island.

As the team gets ready, Zealot is unhappy about the thought of going when there could be missions to complete while Spartan’s android nature means that he has no need of rest. Void joins in with doubts but Warblade and Voodoo do their best to rally them up for some fun. Maul completes the last of his packing, a WHAM TV news report by Sam Haze gains his attention. He hears how Mighty Man was involved in a fight with a villain named Overpower that left a student named Margo Silva injured and in a comatose state at Hillman Hospital. He transforms into his powered form and races towards the hospital, flying past a startled Vanguard.

Meanwhile, Freak Force has returned to Chicago after a mission overseas where they had initially left Barbaric behind. He is briefed on recent events which involved Mighty Man getting in a fight that left an innocent bystander injured and that he is taking it hard. This is the first time that Mighty Man has been involved in something like this and he has maintained an almost constant vigil over Margo.

Mighty Man apologizes to the comatose student as Maul enters into her room and instantly becomes enraged at the sight of him. Maul grows increasingly larger as he attempts to harm his powerful foe but the rest of Freak Force soon arrives on the scene to help their teammate. The Wildcats suddenly teleport in to join the fray and a battle breaks out between the two groups of heroes.

Dart and Zealot get locked in a deadly duel as Voodoo and Ricochet fight one another. Rapture realizes that she is hopelessly outclassed against Void whereas Warblade begins carving into Barbaric. Spartan and SuperPatriot begin a deadly fire fight as Grifter finds himself embarrassed as Horridus momentarily gets the upper hand against him.

Dragon arrives to break up the skirmish with a large number of his fellow police officers and he quickly grabs a hold of Grifter. The pair of them soon manages to end the violence as Mighty Man reverts to his mortal identity of Ann Stevens which calms Maul down. In the aftermath, Maul heads in to visit with Margo Silva who has now regained consciousness. The couple used to be romantically involved and manage to reconcile any past differences before parting company.

Lord Emp takes both the Wildcats and Freak Force away on vacation to his island and the heroes get on very well together. Dragon and Rapture agree to take their relationship up a notch as Ann Stevens gets talking to Maul. He apologizes to her over his actions but is forgiven before Ann then asks if Maul would like to get together for a date. Maul is still too upset over Margo to consider dating again but the fact that she can also transform into a man freaks him out too much.