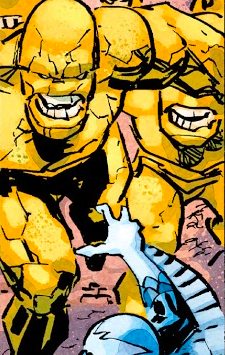 The Stone Men are a group of aliens that attacked Earth in 1951 and were defeated by Captain Tootsie and the Secret Legion along with Space Force. The invading aliens were destroyed when Captain Tootsie shot them with a Fargo-Ray, which cause their bodies to crumble to dust. 70 years later, the Stone Men returned, this time facing Malcolm Dragon and the Canadian super team North Force. The battle went poorly. But Captain Tootsie came to their rescue and again cause the destruction of the Stone Men with his disruption ray, which caused them to crumble to pieces. Why they targeted Earth is unknown. Following the battle, Tootsie and North Force headed to Cyrus-5 in a flying saucer which he had commandeered, intent on ending their threat for all time.