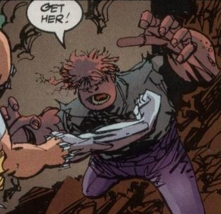 Wreckage was one of the Vicious Circle members locked up in Stronghold Penitentiary when a massive breakout commenced. Dart and Star attempted to prevent any of the villains from escaping but both were brutally beaten down. Wreckage went to rape Dart but was opposed by Mako. He initially assumed that his ally wanted to have first crack at the heroine but Mako actually wished to prevent the assault from happening at all, remembering when his younger sister was herself raped. Wreckage fought with Mako until he had his head bitten off.