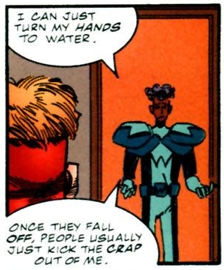 Following the decimation of the original Brute Force, Max Damage held open auditions for replacement members. He had to wade through a number of completely useless freaks until he could settle on a suitable new roster. Water Lad was just one of these failed applicants, his powers proving to be fairly useless in battle. He is later able to join Brute Force