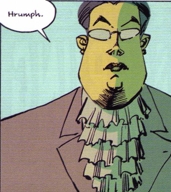 Principal Reed was in charge of one of the many schools that Angel Dragon was enrolled in following her emergence from Dimension-X. She found the teenager to be a troublemaker and when she got involved in a fight, Reed felt that she had no choice but to expel Angel from the school.