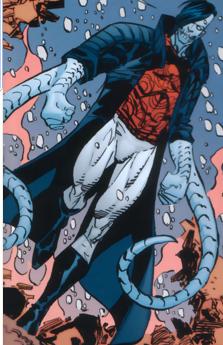 When OverLord III was developing his Dragon Army, Rat Bastard was chosen as a candidate to receive a transfusion of Dragon’s stolen blood  to augment his existing abilities. Unfortunately for this newly developed Dragon Army, Dragon had reverted back to his original Emperor Kurr persona and saw their existence as an insult. Kurr proceeded to eliminate all of those injected with his blood, using the unwilling accomplice of R. Richard Richards and his new Dragon-Slayer as a weapon against his victims.