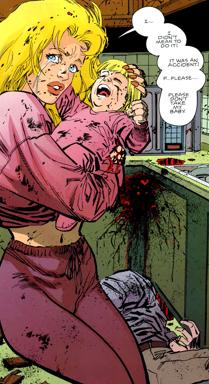 After graduation, Jennifer Wilson married her high school sweetheart, Kevin Murphy. He seemed nice and she thought that was all that mattered. He was a football star, she was a cheerleader. It seemed perfect and it was for a while but then he started hitting Jennifer.

Kevin worked for his dad as an electrician and absolutely hated it. The only release he could find was by beating his wife, taking out all of his frustration out on her. Jennifer thought that the arrival of their first child, Angelica, might help relieve the strain but it only got worse. The beatings continued until one day they just stopped hurting Jennifer.

The reason behind this strange phenomenon was unknown to her, but Jennifer didn’t complain. She thought she was just blocking out the pain, that she was numb to it. It wasn’t until later that she realized that these were the first signs of dormant mutant powers being triggered. It frustrated Kevin that she wasn’t reacting the way she used to. It wasn’t as satisfying as it had been. One day, in frustration, he tried to take it out on Angel. When Jennifer tried to protect her child, she hit him. His exploded. The rest of Jennifer’s superpowers had kicked in.