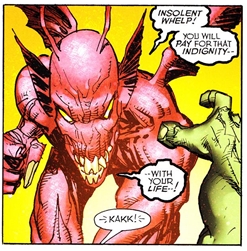 When the original Battle Tank went into Dimension-X to locate his successor and daughter he was captured by the demonic Deathseed on his planet of Deathworld. Rex Dexter was rescued by Dragon and his family and returned to Earth but not unaffected. Something had begun slowly transforming Rex’s body into an ever-demonic looking form. His aggression seemed to increase and he became obsessed with rebuilding the damaged portal to Dimension-X, his actions alarming even his closest allies.