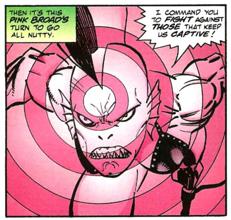 The freak Gator struck up a partnership with the underwater ManEater at some point in the past and went into business for themselves in Detroit. They brought the addictive prostitutes known as the Hookers from Atlantis to the surface world to prey upon men’s perversion but this racket was brought down by the Deadly Duo and Roman.

Some years later, Gator & ManEater had fled into the oceans to avoid the world-wide destruction that had occurred under the reign of CyberFace. They were captured by the Atlanteans and forced to serve as slaves. The duo started a fight with Dragon in an effort to escape captivity, accidentally releasing the long-imprisoned Lava Lords. Dragon escaped in the confusion but the fates of Gator & ManEater went unrevealed.