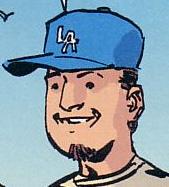 When Dragon took his family to Washington, DC so that he could speak with President Bush about the Gods, he enjoyed a picnic in a park. Addy Henrich approached the family and befriended Angel Dragon by telling her a joke. Her parents came over to apologise for any disturbance but they, and their friends, were instead invited over to join them.