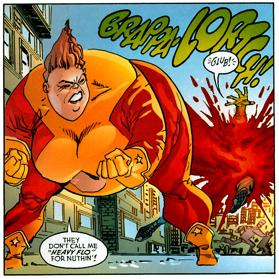 Heavy Flo became one of Freak Force’s bounties, bringing her in when Dragon had been abducted by the Fiend and his soul sent to Hell. Many years later she was similarly arrested for the price on her head, this time by a freelancing Dragon. On a raid on a Bellco factory she is shot with Freak Out and is depowered. Her head is then punched into a bloody pulp by Melvin Bellco killing her.