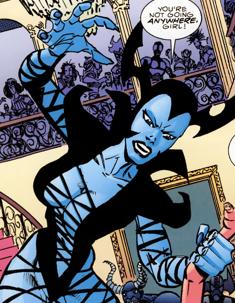 Blue Broad was one of the younger freaks that SkullFace brought into the Vicious Circle once he had finally gained leadership of the criminal organisation. He dispatched her with Devastator to abduct Angel Dragon from school as part of his scheme to finally rid the villains of the Dragon.

Jennifer Dragon was forced to allow Blue Broad to take her daughter for fear of any action on her part getting the child killed. When Dragon assembled an army of heroes to combat the new Vicious Circle, Mister Glum infiltrated the villains’ stronghold with a device that rendered him intangible. He was able to rescue Angel but Blue Broad grabbed a hold of him in the split second he was solid and would not let go. Glum dragged her through a pillar before letting go of Angel, leaving Blue Broad merged with the pillar.