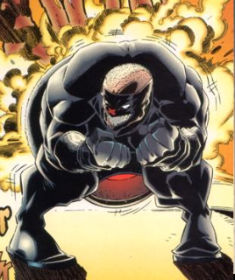 Backfire created by Erik Larsen, with help from Keith Giffen and Jeff Matsuda.

During the Gang War, various factions competed for leadership of the Vicious Circle. One such group was Body Function, a collection of misfits led by CessPool who had almost zero chance of succeeding. SuperPatriot recruited the Dragon to aid him in bringing down the group and their disgusting powers almost get the better of the heroes, well, for a brief period of time anyway. The group were all apprehended and turned over CessPool’s location so that they do not go to prison alone.

Later on, Horde used the miniature Vicious Circle members to break into Stronghold Prison and release large numbers of supervillains. Body Function was some of these criminals and they soon joined Horde in time for his death at the hands of Dragon. Backfire returned many years after this as part of an army of Vicious Circle members led into battle by OverLord III against the Tyrrus Combine. He was killed alongside the rest of Body Function during the ensuing mayhem.