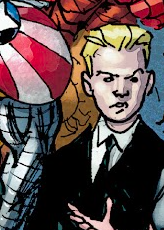 Following the brutal deaths of his twin offspring, the heroes Liberty & Justice, SuperPatriot was left in a state of depression. It was only after his wife broached the subject about trying for children of his own that he began to cheer up. The couple later became parents to twins of their own that they named Liberty and Justice after those that had been murdered.