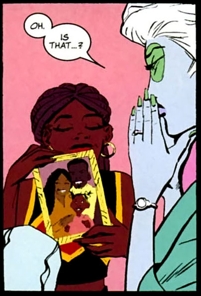 Joe Manning worked as a part-time janitor for Rikko Chemicals where he became exposed to hazardous materials. He mutated into the form that became dubbed as Rock and incurred numerous medicals bills. His wife, Marika Washington, could not cope with the mounting costs and her own repulsion of her husband’s form. She left her husband and filed for divorce, taking young Gina Manning with her. Marika later died from a disease and sent Gina to go and live with Rock.