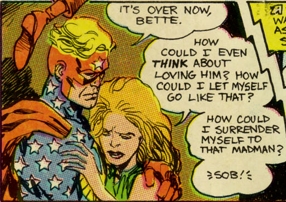 Bette Turlife was a beautiful young woman that was a consort of the original Dread Knight during World War II. When Bette confessed to Dread Knight that she was pregnant he imprisoned her in a fit of rage. Dread Knight was on a quest to find eternal youth and therefore wanted no heir. SuperPatriot liberated Bette just as Dread Knight was about to harm her.

Bette was transported away from Lieberheim to the United States where she married Philip Urass and bore a son named Ronald. Unknown to Philip, the child was actually the son of Dread Knight.