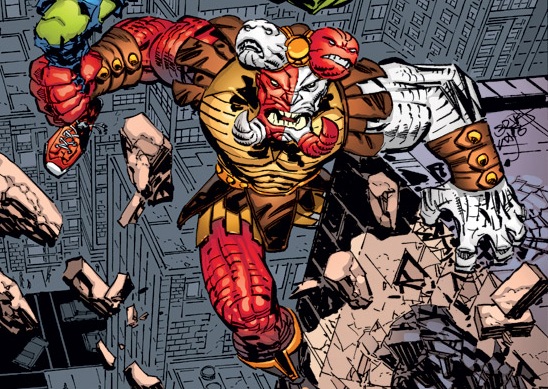 Torment is foe Malcolm encounters who has two miniature heads that extrude from his head who talk. One has a voice for peace and the other for destruction. During the battle Torment flees and is able to hide from Malcolm.

Torment later attacks Malcolm and throws a building on Malcolm and his friends, killing everyone, but Malcolm. Malcolm set on vengeance quickly defeats Torment. When Torment states that he won’t stop killing, Malcolm unloads and sends the full extent of his electricity coursing through Torment’s body. Torment is presumed dead. However, it is later discovered that Torment survived Malcolm’s attack and Torment storms into Malcolm’s apartment while Dragon is babysitting. However thanks to the toddlers, Torment is defeated when the evil worm in Torments head is shot dead by Malcolm. Torment is then arrested. It turns out that the evil worm in his head can grow back as Malcolm killed it previously. It is also mentioned that Torment comes from the underground. He is later killed in a fight with Malcolm Dragon when he smashes his head.