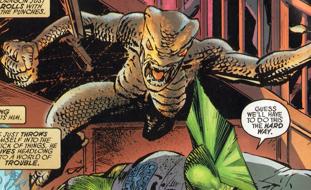 Shortly after Dragon had returned to the Chicago Police Department, he performed a raid on a brothel run by the Vicious Circle. He battled against a number of super-powered prostitutes and the Raptor was one of them. All of these villains were soon defeated and rounded up for Dragon’s fellow officers to come in safely and arrest them. The Raptor is later de-powered when she is shot with Freak Out.