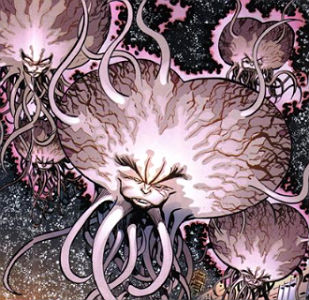 When Dragon was travelling the world in search of his missing wife, he arrived in New York City where he met the cosmic Adam Archer. He sensed an impending danger which arrived in the form of the Headmasters. The heroes fought against these aliens until the Headmasters revealed to Archer that they were merely looking for an infant of their race, one who had been in contact with Dragon before.

Dragon admitted that the Brain-Child had been killed by his wife Jennifer some years ago and was now gone. The Headmasters thanked Dragon for giving them some closure, reciprocating by informed him that Jennifer was deceased. Dragon could not bring himself to believe this revelation until he later got confirmation via a letter from her killer, Jennifer’s own brain-washed daughter, Angel.