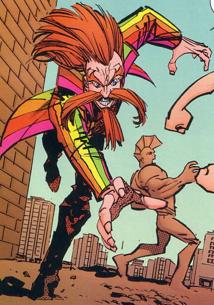 When a humble maker of confections was run out of business by a corporate group, he sought out revenge by paying a visit to the Powerbroker. This led to the creation of the Candyman who immediately set out on a quest of vengeance. He began targeting the men responsible and transmuting them into chocolate. The Candyman then forced his rivals’ obese wives to devour their heads before moving on to other pursuits, the extortion of money from the city of Chicago.

This led to the Dragon getting called in to stop his rampage. Angel Dragon accompanied her father and witnessed him being transformed, only to become the next target. Dragon soon reverted back to normal thanks to his healing factor and he rendered the Candyman unconscious with a single punch. The Candyman then revealed the origins of his abilities prior to being sent off to answer for his crimes. A power dampener devised by Battle Tank was used to temporarily neutralize Candyman’s powers.