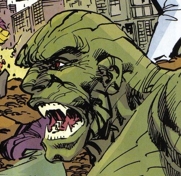 Shock Rocker was one of the many freaks that comprised the Rats and was present when a group of heroes clashed with both the Rats and the Demon Dogs. Red Giant grew too large during the conflict and smashed a building down on top of the villains which killed the vast majority of them, Shock Rocker included.