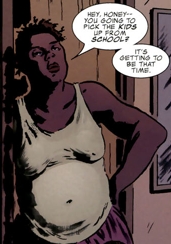 Mrs. Robinson was the wife of retired vigilante Chris Robinson, the second man to wear the Star costume. She lived with her family until Mister Glum took control of the world and enslaved humanity into trying to transform Earth to look like his head. Mrs. Robinson had a pre-existing heart condition and when the physical work began, it was not long before her heart gave out and she died.