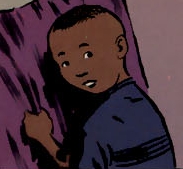 Charlie Robinson was the eldest child of retired vigilante Chris Robinson, the second man to wear the Star costume. Charlie lived with his family up until Mister Glum took control of the world and enslaved humanity, forcing the Earth’s population into trying to transform the planet to look like his head. The foreman of the site that the Robinson family worked at ended up shooting the children dead when they became too weak to work.