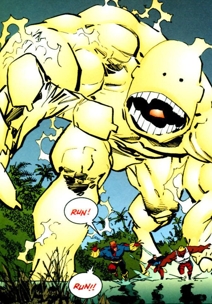 On the notorious Radiation Island, a giant monster was causing destruction which prompted the United States Government to send in their cannon fodder team of heroes, Brute Force. They suffered heavy casualties as the monster consumed some of the members but their bodies’ unstable nature caused their killer to then explode.