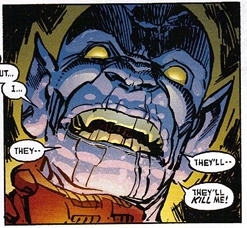 Pug Fugly was the super-freak that OverLord III threatened within the Freak Outpost in order to gain the location of Buster Justice. This allowed the villain to kill the then-leader of the Vicious Circle and assume command. Pug Fugly was then present when Bloop led a revolt against the new OverLord, dissatisfied with his leadership. They later die during a large scale battle where the building they are in collapses on them.