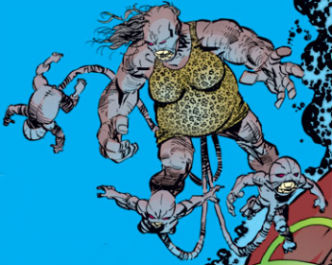 Name: Mother Mayhem
Real Name: Unknown
Former Aliases: Afterbirth (solicitations only)
First Appearance: Savage Dragon #102
Death Issue: Savage Dragon #130
Cause of Death: Incinerated by Solar Man
Group Affiliations: N/A
Height: Around 6′
Weight: Unknown
Eyes: Red
Hair: Brown
Date of Birth: Unknown
Place of Birth: Unknown
Base of Operations: The Universe
Other Distinguishing Features: Mother Mayhem has pinkish skin, an alien face and dresses like trailer trash
Marital Status: Unknown
Known Relatives: N/A
Powers: Mother Mayhem wields the Power Cosmic but the extent of her abilities has yet to be fully revealed. She does possess great resistance to injury and increased strength, plus can control the three flying fetus’ that are permanently connected to her genitals. Nice.

Mother Mayhem approached the Earth and sent back a signal to summon the Devourer of Worlds. The cosmic entity that was later dubbed Universo soon arrived at his next meal, but not before his herald had been confronted by the Dragon. Mother Mayhem was defeated in battle prior to being secured by the rest of the Liberty League.

Over the next few years, Mother Mayhem was kept locked away aboard Vanguard’s spaceship alongside her master. She constantly warned of Universo’s escape and when Mister Glum destroyed the vessel, the pair of them were free to complete the eradication of Earth. It was only due to the intervention of Solar Man that the planet was saved, the ensuing battle resulting in the deaths of both Universo and then Mother Mayhem.