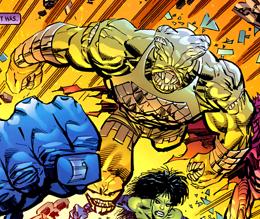 Mr. Faces was one of the many young freaks brought into the Vicious Circle during the reign of Buster Justice. A group of villains were sent to attack President Obama on his return visit to his hometown but Dragon, newly returned to the Chicago Police Department, defeated them all without too much effort. It was later revealed that this assault was merely a distraction to keep Dragon from interfering in a bank robbery taking place across the city. He later dies when hit by Volcanic’s mouth blast during a fight with Mako II