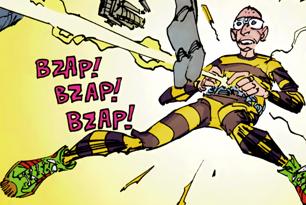 The man who would become Mister Bug had a tortured childhood, going through school getting picked on by the larger students. His intellect and scrawny appearance marked him as different to his classmates and he was bullied throughout his school days. When he had grown up, the lonely man sought out the chance to prove himself to the world, using his genius to create his Bug Belt.

Mister Bug was born and his ambition had him desiring membership within the Vicious Circle, hoping that he could become a feared supervillain. His petition to join was rejected and Mister Bug departed to prove himself by eliminating the Dragon. He killed his landlord before eliminating the policeman Alex Foley.

An angered Dragon punched the Bug Belt, causing an explosion that left the hero limbless and comatose. Mister Bug was transformed into a fly and flew into the hospital room of Dragon to torment him while he lied helpless. Dragon was unconscious, unaware that Mister Bug had slowly passed away due to the short lifespan of the insects.