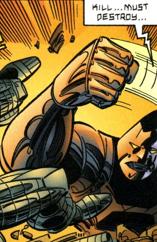 Master Atom was an android created by Dr. Nirvana to challenge the original Mighty Man. It was dismantled by the hero but rebuilt many years later by Nirvana’s daughter, Chelsea. Master Atom was dispatched to kill the new Mighty Man but it was destroyed when Freak Force came to their new teammate’s assistance.