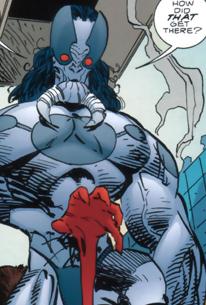 When SkullFace seized leadership of the Vicious Circle, he recruited a large number of freaks to fill the ranks of the organisation. Nick Justice was one such superhuman and he was dispatched to the Rock House Diner to extort money from Rock. The Shrew defended his friend by stabbing through the villain’s chest with his claws before tearing Nick Justice in half. Some time later, Nick’s brother Buster Justice sought to avenge his death and managed to at least retrieve his body.