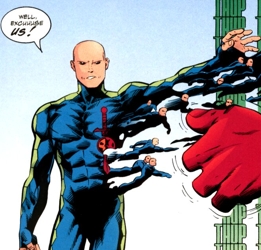 Name: Hive
Real Name: Unknown
Former Aliases: N/A
First Appearance: Freak Force #2
Death Issue: Savage Dragon #115 (Back-Up)
Cause of Death: Punched in half by Mighty Man V
Group Affiliations:The Covenant of the Sword, the Vicious Circle
Height: Around 6′
Weight: Unknown
Eyes: Unknown
Hair: N/A
Date of Birth: Unknown
Place of Birth: Unknown
Base of Operations: Chicago, Illinois
Other Distinguishing Features:
Marital Status: Unknown
Known Relatives: N/A
Powers: Hive can divide himself up into hundreds of miniaturized versions of himself which are each as strong as the original form

Hive was part of a Covenant of the Sword strike team that was created by Johnny Redbeard on their behalf. They were ordered to eliminate SuperPatriot but their intended target was assisted by Freak Force in fending off the villains. Hive was later taken on by the Vicious Circle following the Gang War before reuniting with his former teammates. They returned to the employ of Redbeard, now the Creator, and attempted to liberate him from Stronghold Penitentiary only to be massacred by the Billy Berman Mighty Man.