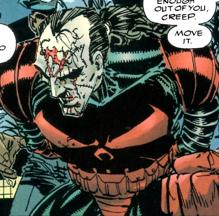 Back when Dragon was first discovered amnesiac in a burning field, Frank Darling secured him a job and apartment at his cousin Fred’s warehouse. Dragon was working there when the vicious circle hit man, Hardware and SkullFace carried out a raid. The villains were defeated by the freak before pre-planted explosives killed Fred and destroyed his building. Dragon decided then to take up Frank on his offer to become a police officer.

After months in prison, Hardware attempted to regain his freedom by giving evidence against OverLord. During a riot at Stronghold Penitentiary, Hardware pleaded to be let out of his cell. Cutthroat recognized him as a traitor and instead of releasing him, shot him dead for his betrayal.