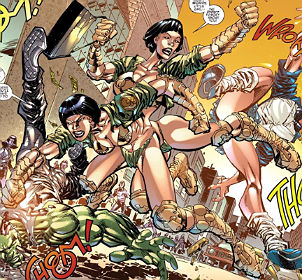 Paige was an ordinary young woman who got caught up in a failed science experiment that ended up not only duplicating her but also merging these two twins with one another. With a penchant for crime and little other desires, Double Paige joined up with the Vicious Circle.

OverLord III’s desire to turn the criminal organisation into a freaks rights movement was not a popular decision with Double Paige. She carried out a bank robbery that drew the attention of Malcolm and Angel Dragon. Vein joined her teammate to battle the young heroes but she and Double Paige ended up getting apprehended when PowerHouse assisted them, eager to help OverLord III achieve his goals.

Double Paige later breaks into the Chicago Police Department to steal Flash Mercury’s mask. However, before she is able to, she is knocked out by Malcolm.