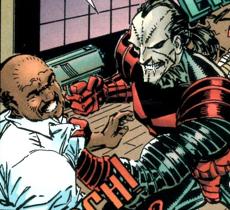 Shortly after his discovery, Dragon had nowhere to go and so Frank Darling arranged for him to work for his cousin Fred at a loading dock. Dragon got an apartment to live in on-site and was happy with the manual work. Frank wanted to recruit Dragon for the police department and so arranged for the Vicious Circle to target Fred’s warehouse. This exposure was to have convinced the amnesiac freak to join the force. This plan backfired when Fred was killed in an explosion, although Dragon did ultimately become a cop.