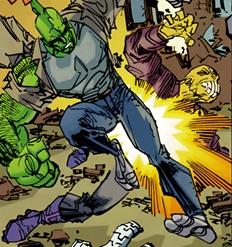 Chop-Choppers was amongst a group of Rats that had ambushed a group of Chicago police officers, killing Officer Harry Balzac. Dragon intervened and managed to intervene before any other loss of life and fended off the Rats. Chop-Choppers later took part in a pitched battle between the Rats and several heroes within the Danger Zone, Fire Lord and his army of Demon Dogs joined the fray. These super-freaks threatened to overwhelm the heroes until they were eventually driven off. Red Giant had grown too large for her brain to work properly and her aggression levels increased to the point that she seemingly crushed the villains all to death with debris. Chop-Choppers was amongst those that did not survive this action.