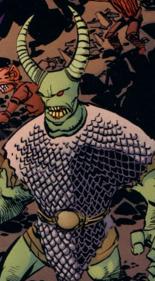 After Chicago had been abandoned to its fate by CyberFace, many of the remaining citizens sought out the Creator for superhuman abilities which would aid them survive in such a harsh environment. As their number grew, factions began to form and one such was the Rats, led by Battle Ram.

Battle Ram led the Rats on two separate assaults upon the Dragon but both such attacks failed to claim the hero’s life. When urban renewal began in Chicago, the Rats were forced to retreat into a region still untouched by repair that was known as the Danger Zone. Battle Ram was absent when the Rats joined forces with the Demon Dogs II to battle against a group of heroes. The villains were almost all crushed to death by Red Giant in too large a form, resulting in her brain growing fragile. Battle Ram later fought Dragon by himself but was defeated by the hero.