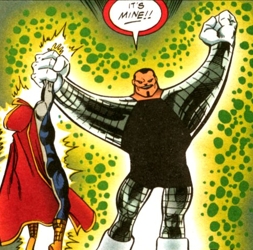 Absorbing Junior sought to make his name by targeting the Dragon, hoping to steal his power so that he could establish himself as a legitimate threat in Chicago. He encountered Mighty Man II instead and despite initially wielding the hero’s might, when he reverted to his mortal form of mild-mannered nurse Ann Stevens, he was left weakened and was easily defeated.

Absorbing Junior later seeks out Zeek in order to steal his power. However, the odds are not in his favor as Zeek quickly overpowers him and murders him by crushing his head into a bloody pile of gore.