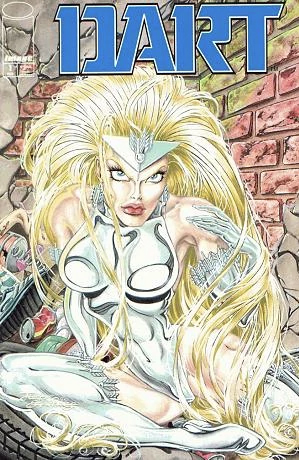 February 1996
22 Pages
NOTE: This mini-series is no longer in-continuity

It is the year 1990 and in Detroit, Michigan a group of children play with action figures of two rival super-teams. They are a focus group put together by Galb Toys’ C.E.O. Gregory Brockman to test whether these new variations of the teams will be a hit upon release. Mistress Brouhaha is the leader of the villainous Vogue Attack and she consults on the whole process. Gregory suggests that they need to create a bridging character for Blood Chic that is an ordinary human, making it easier to relate to them.

Gregory enters into the studio of his wife who is the primary designer for his company’s toys but she remains focused on their now defunct toy line of the Forest Folk. She is instructed to design the character that he has envisioned as part of Blood Chic. Leah Brockman does not really understand what Gregory is asking but settles down at her drawing board to attempt the task regardless.

Meanwhile on the city’s streets, two tourists from Australia are chased by a gang that are seeking to rob and murder them. The couple are aided by a new vigilante calling herself Dart who leaps into action, brutally beating down the criminals. She recalls an incident from her past where her father murdered her mother in front of her eyes but manages to shake out of this flashback to resume her mission. This act of heroism is filmed by a nearby man who plans to sell the footage to the media.

Kill-Cat leaps down into the alleyway and his presence sends the remaining criminals running for their lives from the two heroes. Kill-Cat introduces himself to Dart and tries to ask her out but she is uninterested and departs. A news bulletin shows the debut of Dart to the public and Gregory Brockman watches on with interest. He races into see Leah and rubbishes all of her designs as being too derivative of the Forest Folk.

The image of Dart has struck Gregory as being perfect for exploitation and he orders Leah to either adapt her likeness or copy it wholesale, reasoning that Dart could not copyright her costumed identity. Leah is uncomfortable with stealing someone else’s image but Gregory dismisses her concerns and believes that no one can stop his plans. Gregory thinks that any problem that arises can be resolved thanks to his allies in Vogue Attack…