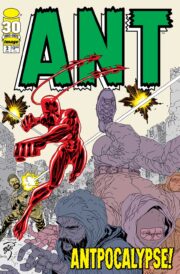 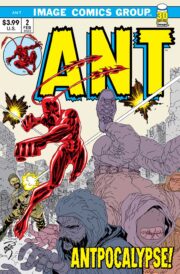 Erik Larsen: Story, Art & Color
Jack Morelli: Letters
Mike Toris: Flats
Josh Eichhörn: is the worst nuisance on the beach
Mario Gully: based in part on the work of

Hannah Washington fantasizes about fighting terrorists but it’s all in her head. We see her wearing a straight jacket in a padded cell. Apollo Steele tries to get Hannah’s secret but finds that doctors can’t detect any hint of her power though Steele know that she killed a special op in her burning home. Sometime later, Hannah is moved to another cell but she is unresponsive. Steele sends in Hannah’s mother to talk to her, which he hoped might awaken her from her delirium. It does. Hannah breaks out of the cell and vanishes. Sometime later she finds herself back in school in Brooklyn, still tormented by classmate, Carrie Wolf. Steele instructs Gadget Man to locate Hannah and become her new best friend.

When Hannah is followed down a dark alley by a group of thugs, she reactively slices them to ribbons. Police find the girl in torn clothing, bathed in the blood of her attackers. She’s taken into custody and jailed. By the time the government is able to get Washington transferred over to their custody, things have changed. Steele is no longer in a position of power and power powered beings are now under military command, with General Irene Sterling in charge. Steele is told to leave.

Now in government care, Hannah Washington is given decent training, and better guidance how to use her powers and abilities, but General Sterling sees her as a weapon to be used at her discretion. Hannah has peers. Friend. Teammates. And Gadget Man has made it his mission to follow Steele’s instructions and align himself with the girl.

After some time, Hannah and others are sent on a mission to clear out terrorists from town which had been overrun, having been told that American hostages were being held. Hannah parachutes into the town, transforming into her Ant identity. When a female teammate is attacked and knocked unconscious, Ant goes berserk and slaughters everyone in sight. When the dust settles, there isn’t a sound to be heard. Not a breath, not a moan, not a captive. At that point Ant questions whether there were any hostages being held at all.

Then Ant falls in a heap. The government had put something in her head, and having witnessed this very deadly weapon in action, Gadget Man shuts down her mind, rendering Ant unconscious. Gadget Man says that he’s setting her free.