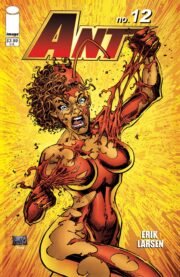 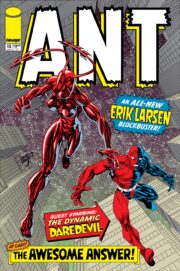 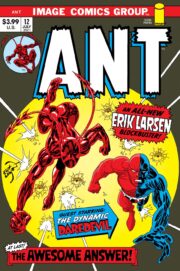 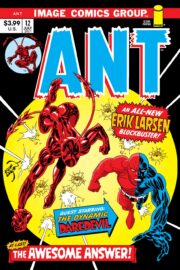 The story opens in a sewer as Ant’s companion Charlie is killed. The killers close in on Ant who scrambles to escape from their pursuit. Fighting the mercenaries, Ant injures several but is kept on the run as they pursue her. The killers are joined by the Headmen who attack Ant with mind-blasts.

Ant stands her ground but the killers are closing in. Suddenly the government operative Daredevil saves her from a deadly blast. The two fight valiantly and the Headmen are defeated but when a mercenary shoots at them with a hand cannon, the tunnel walls come crashing down, knocking Ant unconscious.

Daredevil faces the foes until Ant resumes consciousness and rejoins the battle. Eventually Daredevil catches a blast and Ant too is knocked unconscious.

When Ant regains consciousness, she is being held in an elaborate mechanical device. A figure steps out of the shadows. It’s her Father, Daniel Washington. Unbeknownst to her, Ant’s father was a scientist. With the  of a touch few buttons Ant feels a sudden shock and with that, her memory is restored. Ant reverts to Hannah Washington and has a conciliatory conversation with her father where he reveals that the government had put in her head to try and control her and keep her from the truth. He tells her that he disabled their implant.

Daniel outlines what has been going on behind the scenes, an evil faction is scheming to cause the biblical Rapture and survive it. He reveals that her Ant costume was conceived as a means to survive nuclear annihilation. He allows Hannah to walk free and resume her life, vowing to keep in touch.