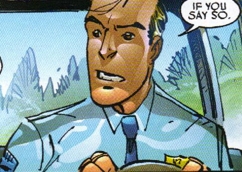 Jerry Zout, along with his partner Dwayne DePool, were the officers of the Chicago Police Department that were charged with looking over a Bellco Chemicals plant following a fight between Dragon and members of the Vicious Circle. Jerry had a habit of kidding Dwayne about sleeping with his wife. He was unaware that Dwayne became the first victim of the monster Virus. After this death, Jerry accompanied Dragon on his investigation of Dart II, ultimately leading to his own murder at the hands of the villain.